The best iOS crash reporting tools have to meet many expectations. They need to monitor crashes, generate crash reports, filter and group errors, and perform other tasks.

In this article, we have collected the 10 best iOS crash reporting tools so you can make a decision. They can help you catch errors in real-time, identify patterns, and fix bugs before they affect your customers. 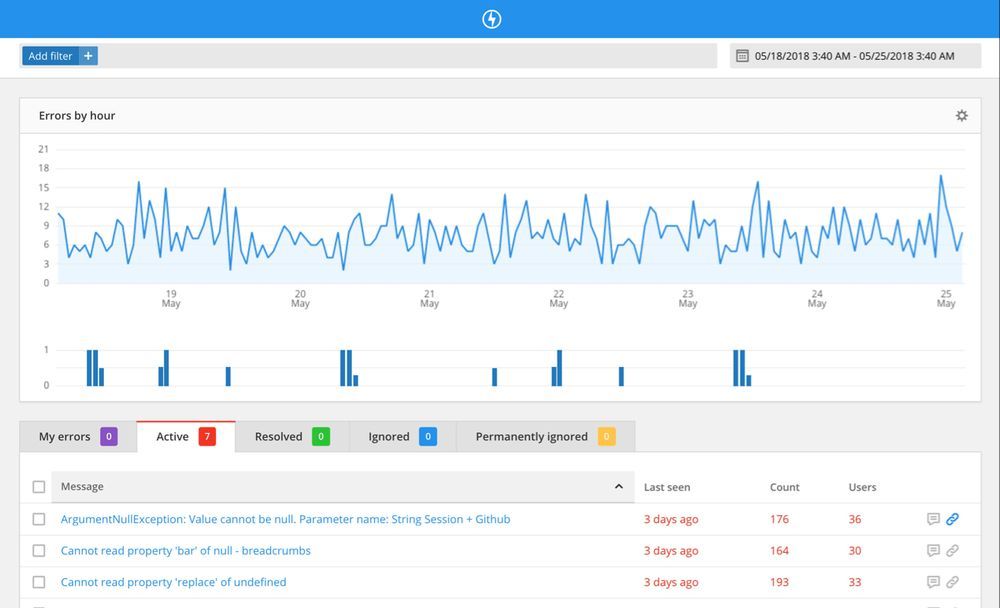 Raygun is an error monitoring software that supports more than 30 languages and frameworks. The iOS crash reporting tool is available right from Raygun’s integrated dashboard. It takes only a couple of minutes to add it into your iOS app, and Raygun starts to collect crash data automatically.

You can use the Raygun4Apple library to monitor both Objective-C and Swift applications. Crash reports include all the details you need for replicating crashes your users encounter, such as:

With Raygun, you don’t only see aggregated data but also the specific users affected by the crash. This is because you can use Raygun’s iOS crash reporting tool together with real user monitoring. Using both tools, you can get complete user session information about every crash affecting your app. You also can customize each crash report with custom data your developer team needs.

As Raygun integrates with many tools, you can import your crash data into third-party platforms, too. For example, your team can receive real-time Slack notifications about every crash and act immediately. 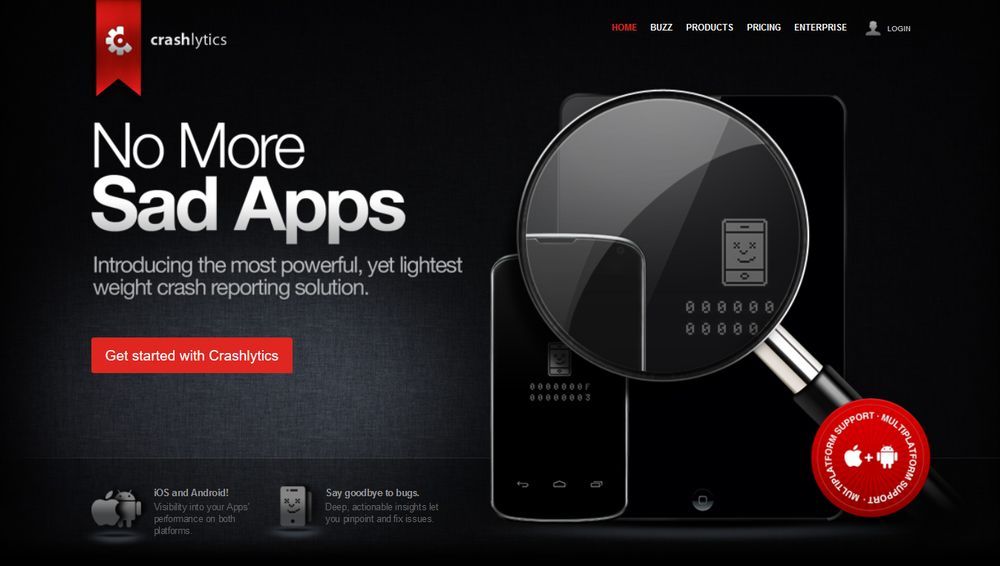 Crashlytics is a crash reporting tool that allows you to monitor your iOS applications. Thanks to its huge success, Google acquired it in 2017 and integrated it into its Firebase mobile development platform.

As soon as you add the Crashlytics SDK to your iOS app, it automatically begins to track crashes. Crashlytics’ reports are also customizable. They include critical information about each crash, such as:

Crashlytics analyzes stack traces and prioritizes the most relevant threads. It works together with Firebase’s other features such as an in-app messaging tool that lets you contact your users right after a crash happens. 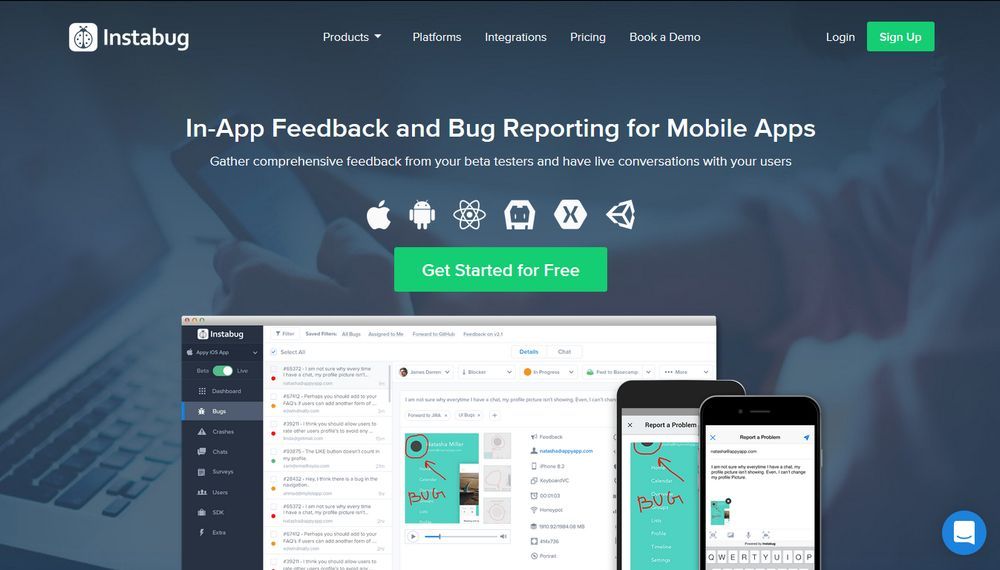 Instabug is a popular iOS crash reporting tool that focuses on customer communication. It enables you to set up a two-way communication channel between you and your users. Whenever your iOS app crashes, you can start live conservation with the affected user.

Besides chatting with end users, Instabug also lets you collect in-app feedback from your beta testers. Both users and testers can leave bug reports, including screenshots, voice reports, annotations, and screen recordings.

Instabug’s crash reports contain comprehensive information about the running environment captured on your users’ devices, including the stack trace. They also detail the steps your development team needs to take to reproduce the crash. You get access to aggregated charts as well that can help you identify trends and catch anomalies before they cause errors.

Bugsee takes a unique approach to iOS crash reporting. Any time your app crashes, it records a video that shows the last actions of the user, including touch movements. Then, Bugsee automatically connects to your bug tracker of choice and creates an issue about the crash.

Bugsee integrates with multiple bug tracking tools such as Jira, Bugzilla, GitLab, and many others. In your bug tracker, you need to click the link Bugsee adds to the issue, and you are redirected to Bugsee’s platform. Here, you can see all the details Bugsee has collected about the crash.

Besides the video log, Bugsee provides you with information about the user’s device type, OS and app version, and other crucial data, too. Crash reports also include console logs, stack traces, and all the network requests your app was making when the crash happened. 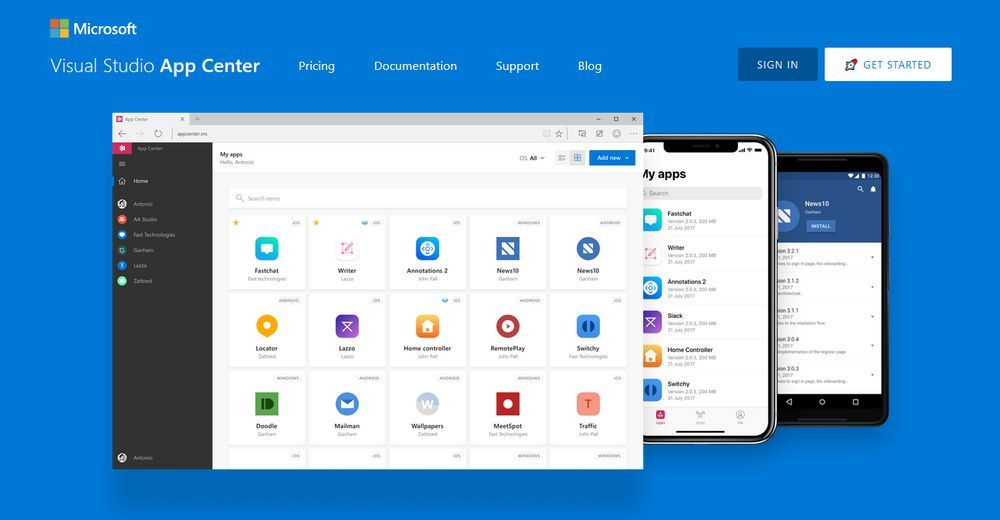 Visual Studio App Center is Microsoft’s all-in-one solution for mobile app development. In 2017, the company announced that they would integrate HockeyApp, their popular mobile crash reporting tool with the App Center platform. Since the merge of the two applications, you can reach HockeyApp’s crash reporting features from App Center’s Diagnostics service.

App Center Diagnostics generates charts of all crashes affecting your users. You can filter the charts by parameters like app versions and time frame. Besides manual filtering, App Center automatically groups crashes by similarities. This way, you can compare different scenarios that caused the same type of error.

You can add attachments to crash reports, view events that happened before the crash, and export crash data to Azure. App Center also integrates with four bug trackers (Jira, VSTS, Azure DevOps, and GitHub) where you can further manage your crashes. 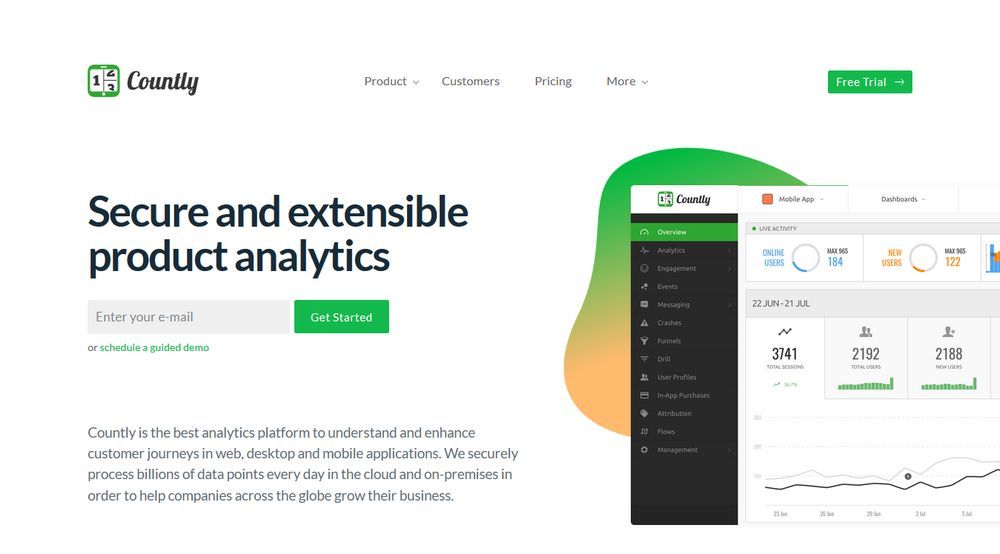 Countly is an open-source, real-time mobile and web analytics platform you can also use for iOS crash reporting. To collect iOS crash reports, you need to integrate Countly’s iOS SDK into your application.

As Countly has an extensible architecture, you need to use plugins to add features to the platform. Currently, Countly has two crash reporting plugins:

The crashes and errors plugin automatically groups crash reports to help you find the root causes of issues your users encounter. It lets you apply filters, analyze individual crashes, and share crash reports across your team. You can also customize your reports and logs and check out the last actions your user took before the crash.

The symbolication plugin takes the analysis further by adding crash symbolication support to your iOS app. So, you can track back the origin of each crash, down to the source code level. 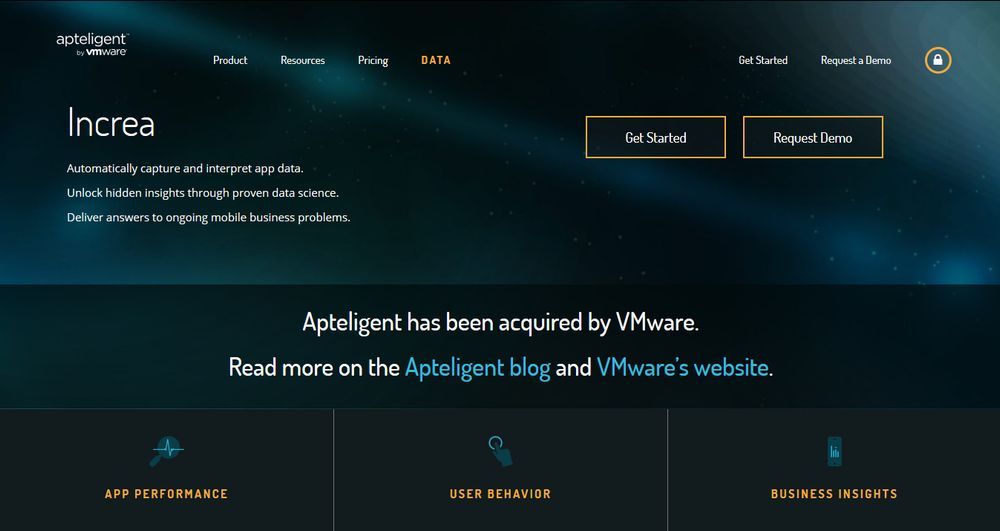 Apteligent is a successful mobile analytics platform that started under the name of Crittercism. In 2017, VMware acquired it but it’s still available as a standalone application. Apteligent is primarily a mobile application performance monitoring tool (mAPM), but it also has excellent iOS crash reporting capabilities.

With Apteligent, you can collect crash data in real time and identify the reasons that led to each crash. It provides you with all the information you might need, such as geographical locations, app versions, and devices. Apteligent groups crashes by root causes so that you don’t have to inspect logs and stack traces one by one.

The dashboard includes informative graphs and real-time stats that can help you better understand your data. For example, it has a graph called Crash Rate Benchmark Comparison that compares your crash rate to the global benchmark in your category. 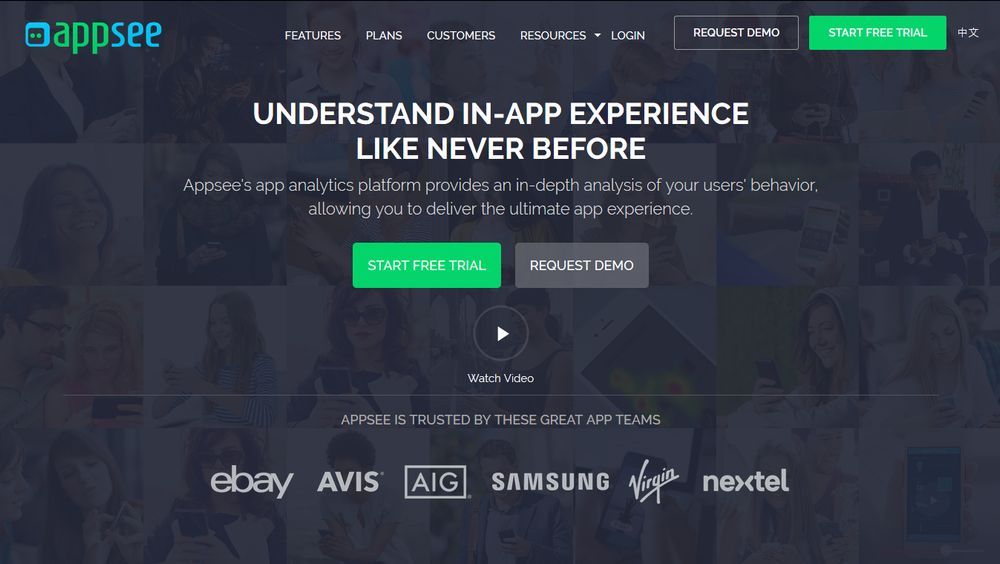 Appsee is a lightweight mobile app analytics platform that comes with a built-in iOS crash reporting tool. It’s probably best known for showing every gesture your user performs while using your application. Besides recording gestures, Appsee also creates videos of all crashed sessions.

You can add Appsee into your iOS app with one line of code, and it automatically starts to track user actions. It generates symbolicated crash reports so that you can find the exact code line that led to the crash. Appsee aggregates crash data into easy-to-understand visual reports. 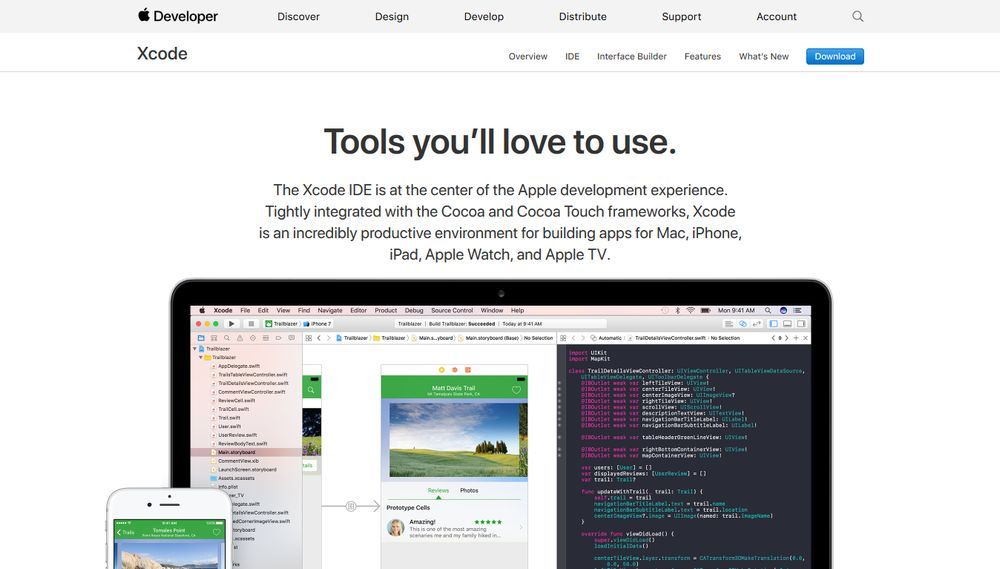 XCode is Apple’s official IDE with which you can build apps for macOS, iOS, watchOS, and tvOS. It comes with a couple of crash reporting features as well. XCode collects crash data from your iOS and other Apple apps, groups the crashes by causes, and symbolicates crash reports.

To improve iOS crash reporting, Apple also acquired the Buddybuild platform in early 2018. According to TechCrunch, they intend to build Buddybuild’s features into the XCode editor in the future.

Buddybuild is a popular CI/CD and user feedback tool for mobile apps, with advanced crash reporting features. For instance, it adds source context to crash reports, lets users and testers to create annotated screenshots, and records videos of the last interactions before the crash.

It’s still not known how XCode will look like after the integration, but we can expect valuable additions to the crash reporting service.

Bugsnag is an open-source application monitoring solution that supports over 50 platforms. Its iOS crash reporting tool generates crash reports with full, desymbolicated stack traces. It supports both Swift and Objective-C and captures all handled and unhandled exceptions occurring in your app. Crash reports come with sophisticated error grouping, filtering, and sorting options.

Bugsnag also has an informative Releases dashboard that helps you decide whether a release has been successful or not. It calculates error rates in real time and shows the percentage of error-free interactions per release. If the error rate gets too high, you can roll back the release until your team fixes the bugs.

You can identify anomalies in your error rate, too, as Bugsnag alerts you whenever a change in your code causes more errors than usual. It also lets you create automatic breadcrumbs with which you can add custom diagnostics to your iOS application.

How to choose the best iOS crash reporting tool

To find the best iOS crash reporting tool for your business, you need to assess your goals and architecture.

Integrations and features are important factors to consider. There are typical features that most iOS crash reporting tools include, such as error grouping and crash report customization. But, each platform has its own unique capabilities, too, that can make a difference for your business.

As Raygun allows you to pair up crash reporting with real user monitoring and APM, it provides you with a full view of all crashes and errors affecting your iOS apps.

Writing high-performance code is easier with monitoring in place

Learn more about how Raygun enables you to build stronger, faster software for your customers with a free 14-day trial.