Massively reduce the cost of bugs with error tracking

So you’re using Raygun for error tracking and starting to see some of what it can do. I wanted to share some of the ways that we use Raygun internally to keep the cost of bugs as low as possible (while also improving our delivery speed!).

Record errors from the start

Ok, so let’s be honest, we all know that the earlier you fix a bug, the better. But how much better? Based on Barry Boehm’s “Equity Keynote Address” March 19, 2007, you’ll find the cost gets crazy high if a bug makes it to production: 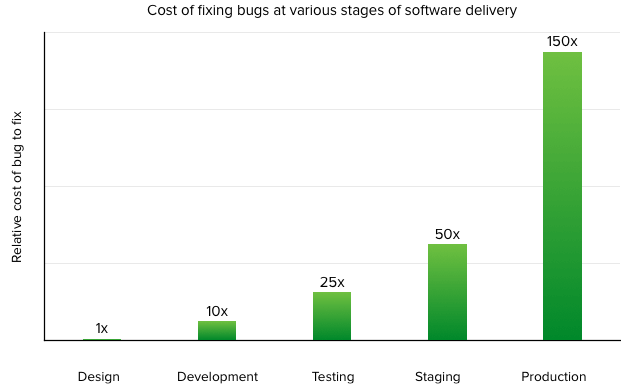 So it’s 150x more costly to fix a bug in production! You’d certainly find a pretty quick return on your Raygun investment by recording errors earlier in the process. Having said that, our experience has been that Raygun can drastically reduce the cost to fix a production error by providing enough information for a developer to fix it pronto: 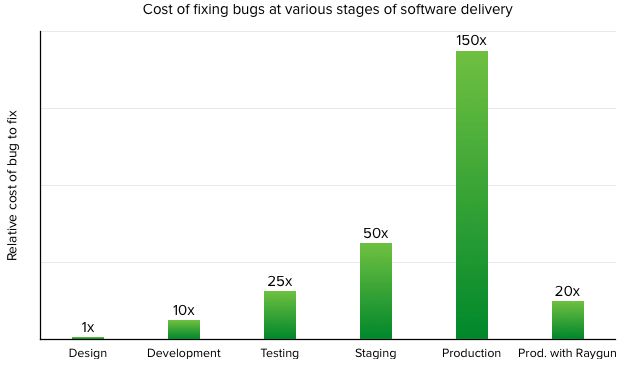 Of course, our experience is influenced by good tools – continuous integration, plenty of tests to watch for regressions and easy deployment. However, it’s clear that getting the information you need when you need to fix an issue, can save a ton of issues. Not to mention that Raygun will let you know as soon as an error occurs.

No more waiting for the screenshot of your funny 500 page inside a Word document… oh how we all love them, am I right? 🙂

This is also why we track errors in our staging and office test environments with Raygun also. It’s just faster than it’s ever been to fix a bug. Anything that improves our delivery is a win.

After developing and testing a feature locally, you deploy to Office, where it’s given a kick-around by the team, then promoted to Beta. Stakeholders can then give you feedback, and you can verify it’s not going to bring the live site to its knees by examining ‘Sportsite – Beta’ in Raygun. Any issues are immediately apparent. When it’s good to go deploy it to production, and if any gremlins appear they will appear in SportSite – Production, separate from more recent dev versions. If you get an email about an error in production, you know it’s urgent!

If you haven’t already seen this, Raygun sports a bunch of integrations with popular issue tracking and project management services, like FogBugz, GitHub, JIRA, YouTrack and more. In combination with the team chat plugins like Campfire and HipChat, these ensure no errors get past your team.

We’re using this workflow internally to great effect: errors arrive from Production and we’re instantly notified in HipChat. Clicking the link brings up the error in Raygun, where we can assign it to the appropriate issue in GitHub, or create a new one. It’s assigned to the relevant developer, who can schedule it according to criticality. Everyone’s kept in the loop throughout the whole process, which results in a unified team that can respond as one.

Every Raygun user gets a 14-day trial – no credit card required. You can sign up in a matter of seconds. It couldn’t be easier to be improving your software quality.

How much are software errors costing in 2017?