Tips, tricks and tools for switching from Windows to Mac

I’m more of a Windows user which I use a lot at home and most of the time at work. At Raygun, I maintain the Raygun4iOS provider and a few other projects that require a Mac. This is a list of a few tips, tricks and tools that I’ve come across since starting to work on a Mac that others may find useful.

As mentioned, I work on both a Windows machine and a Mac in the office, and sometimes switch between them frequently during the day. To help with this, it’s very useful to only require a single keyboard and mouse that you can slide from one machine monitor to another. There are several software and hardware options to achieve this. The solution I go with is Synergy which I’ve found to be easy to use and reliable. It even syncs the clipboard between all the machines which comes in handy. This used to be free a while ago, but will only cost you $10 to get it now.

Open a Terminal from Finder

Sometimes I need to run some commands in a Terminal within a folder that happens to be open in finder right in front of me. Rather than navigating through the directories in a Terminal window, it would be nice to jump straight from the folder in Finder to a Terminal window – like in Windows. Well, Mac does have this feature too, it’s just hidden by default. To enable this feature, open “System Preferences” and click the “Keyboard” item. Next, hit the “Shortcuts” tab at the top, then select “Services” from the left hand pane. Now, scroll through the list to find “New Terminal at Folder” and mark it as selected. 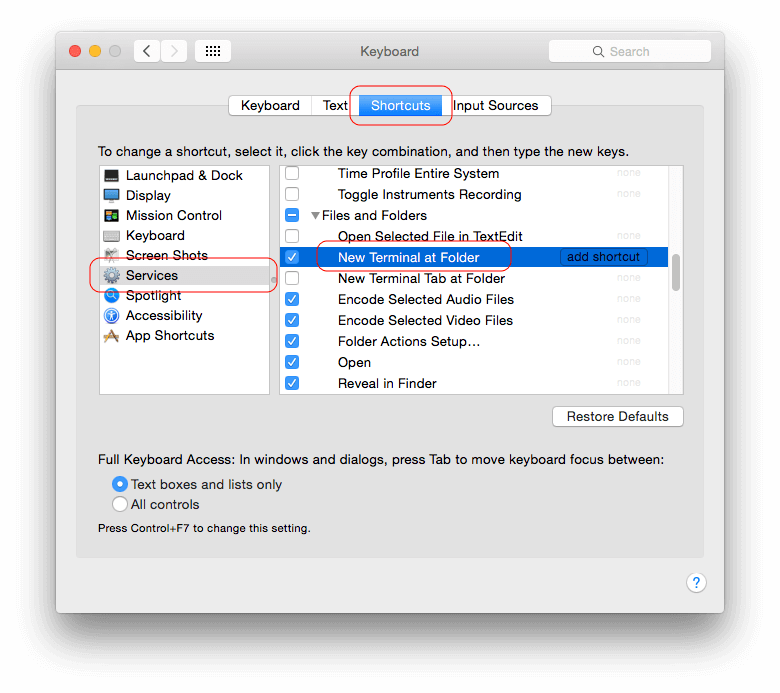 To use this feature, right click a folder in Finder and the “New Terminal at Folder” option should be at the bottom of the menu.

There isn’t a print-screen button on a Mac keyboard, and there doesn’t really need to be – Mac provides several shortcuts for taking screenshots in different ways.

Command + Shift + 3 will take a capture the entire screen and save the result to the desktop.

Command + Shift + 4 is a bit more useful, as you can then drag a crosshair on the screen to capture a rectangle. Releasing the mouse will take the screen shot, or press Esc or right-click to cancel.

Command + Shift + 4 and then press space will switch to window select mode. Click to create a screenshot of just that window (or even a context menu) including the surrounding shadow.

I used that last one to take the image displayed in the trick above! As I’m using Synergy and a Windows keyboard, I use the Start key in place of Command. Additionally, holding Ctrl while using any of these screenshot shortcuts will cause the result to be saved to the clipboard instead of the desktop.

Is your desktop cluttered with windows? Probably not – I still don’t have Mac desktop management down. But if it is cluttered, and you just tried out the previous tip to save a screenshot to the desktop, then it’s probably hidden behind a sea of windows. Fastest way to access it now is to press F11 which animates all the windows to the edges of the screen to display the contents of your desktop. Pressing F11 again restores the windows back to their original locations.

When I’ve got two XCode windows open and want to compare or edit code in both, I put the windows side-by-side as surely anyone would do. As far as I can tell, there isn’t a Mac feature that lets you quickly snap windows to the left or right of the screen though, so I manually resize and position them instead. I’ve played around a little with a tool called Moom which is simple, cheap, easy to use and has a good set of options – such as snapping to a corner or custom grid positions. This is mainly used by hovering the mouse over the green zoom button of a window and selecting an option.

A good free option would be Spectacle which is even more simple if all you want to do is snap to half of the screen. When it comes to window snapping on a Mac, there are a lot of options. These just happen to be the two I’ve played around with.

In Finder, if you right-click some empty space, you get a small context menu containing tasks such as “New Folder” and “Paste Item”. If the folder you have open in Finder is packed full of files, there isn’t any empty space to right-click. You can get around this by holding the Shift key while right-clicking to force this menu to be displayed. Note that this only seems to work when finder is in column-display mode.

iExplorer is an iOS device manager app that lets you manage files on an iOS device. I use this tool while doing iOS development to check that files are correctly being created on the device. I can then use iExplorer to transfer the files to the Mac for further examination or processing.

Quickly get your IP Address

In the Mac menu bar is a Wi-Fi button which looks like a signal icon. Holding Option while clicking the Wi-Fi button will display additional information in the menu. (Hold the Start key if you have a Windows keyboard). Under the name of the network you’re connected to will be a list of greyed items – the first one being your IP Address. Other ways to find your IP address is to open “System Preferences” and go to the “Network” section, or run something like ‘ipconfig getifaddr en1’ in the terminal.

I hope that at least one the items above is new and helpful to you. I’d love to hear any other tips, tricks or tools that you’ve found useful in the comments below.