Programming is hard. Is there a problem with my brain?

“Now, navigate to a small folder in Terminal that you want your program to open with. Good, now it’s time to create your symbolic link in your PATH folder, BUT, before we do, let’s check your profile file by using nano ~/.bash_profile.”

My mind flicks through the catalogue of these words in my brain, I know I’ve learned them at some point, but I can’t piece them together into coherent instructions to myself before the teacher has moved on to the next topic.

‘What keyboard shortcut opens Terminal again? Command and Space – no wait that’s on a Mac’.

I grit my teeth and try not to think about how far behind the Treehouse instructor I am, as I scramble to open up Google and look up keyboard commands for the hundredth time.

This was meant to be an intro course – so why was I finding it so hard?

This scenario is not uncommon for me, whether I’m doing an online course, attending one IRL or having a colleague or friend teach me programming concepts. I always wind up feeling dumb, frustrated, and angry with myself and whatever poor soul is giving up their time to help me.

Most sessions end abruptly with a tight feeling in my throat and a rising swell building up in the back of my eyes before I declare that I’m not doing it anymore, and quit for the day. Sadly, most of the time I’m just a few stages away from completing a module, or making my app thing work, or having a break through – but it’s too late. The damage is done.

So I’ve been wondering, why is this? Why is learning to code so hard?

So, with these gems of wisdom, these are my tops points for why I think programming is hard:

You know that thing where you just don’t get something – a maths equation, a programming problem, grammar in a foreign language, the political regime in South-East Asia…

And then some smarty pants comes along and glances over your shoulder, or interrupts you mid-sentence to say:

Yeah that. That is why we can’t have nice things. Now you have to struggle through understanding the task at hand knowing that it should be easy, and everyone thinks so but you.

Possibly even worse though is:

Seriously, it doesn’t matter that it’s not considered a ‘real’ programming language – it’s still a new skill that needs to be learnt. Trying new things is scary. It’s about being brave enough to be in the vulnerable position of not knowing and there’s nothing wrong with failure or uncertainty – in fact, it’s an important part of success.

And what’s the deal with that ‘I can’t believe you didn’t know that’ attitude in the tech industry? It’s impossible that someone can know every single idiosyncrasy about a programming language – they’re very complicated beasts. When did it become OK for us to belittle each other like this? Perhaps we’re just afraid we’ll get ‘found out’ for not knowing something.

It’s normal to find a new skill hard at first. As Jake the Dog once said, “Sucking is the first step to being sorta good at something”. And he is so right. 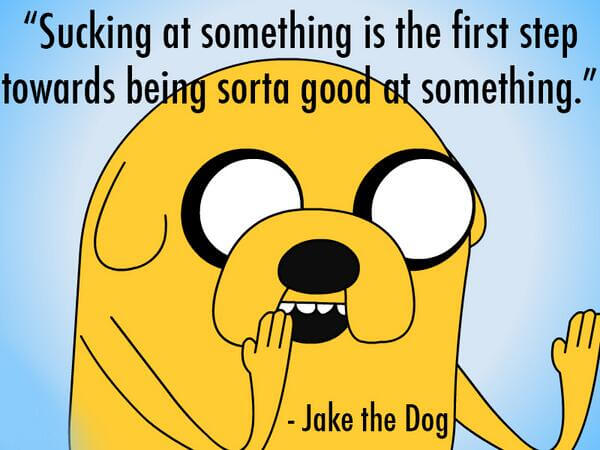 My favourite excuse to use when maths and programming problems are over my head:

“I don’t get it because I have a creative mind. Programming is logical and my brain just doesn’t work like that”

And while I so love to cling to this notion that I’m good at writing and painting because I’m a creative left-brained thinker, and I struggle with maths and programming type disciplines because they are primarily right brain based activities – there’s a lot of evidence to suggest that this is an outdated way of thinking.

The article ‘Debunking The Myths About The Programmer’s Brain‘ by Belle Beth Cooper investigates some of these common myths about how programmer’s minds work, and points out that “Our brain hemispheres are inextricably connected. Both sides are co-dependent and each takes a part in most thought processes”.

So, could it be that I’m just better at creative things because I’ve simply had more practise at them, due to believing I am naturally good at them? The saying comes to mind: ‘whether you think you can, or think you can’t – you’re right’.

Probably summed up perfectly in this Tech Crunch article, while the recent push that ‘anyone can learn to code’ is doing amazing things for encouraging more people to join a previously seemingly unreachable industry, we could be going about it the wrong way by insisting that it’s an easy skill to learn.

As Kate Ray puts it in her article, ‘as a programmer, there is a limitless amount of stuff to learn’ – and a constant sense of inadequacy is sadly not uncommon for even those considered specialists in the field.

I think a better message to those who are just starting out might be that there is a LOT to learn, it might be challenging, but you CAN do – step by step. The following video about ‘How To Get Good At Anything’ explains that rather than trying to learn it all at once, and setting unclear goals like ‘I want to learn how to code’ – you need to be more specific about what you want to achieve, and break the tasks down into smaller tasks.

So maybe, instead of feeling sad that I can’t understand JavaScript yet – I’ll focus on just learning enough to make one part of my static blog interactive. Then, move onto the next step. And be prepared that I’ll probably be terrible at first, but that Jake the dog said that is totally OK.