Raygun’s Launch Notes are your regular round-up of all the improvements we made to Raygun last month — from significant features to performance updates.

We’ve made some major improvements to our custom timings feature in Real User Monitoring:

This month’s update also removes the rounding from count metrics on:

We’ve deployed an update to the search bar on the main RUM performance page. This update significantly reduces search time so you can quickly find the pages that you’re looking for.

Raygun Crash Reporting now supports capturing CSP violations, an added layer of security that helps to detect and mitigate certain types of attacks, including Cross-Site Scripting (XSS) and data injection attacks. Configure the reporting API to send violation reports to Raygun and we’ll transform them into a detailed crash report.

The Blacklist feature has been renamed ‘Code filtering’ and can now be used to not only exclude, but include specific methods within an excluded namespace.

This feature is useful because it helps to filter out unwanted data from captured traces, e.g. short running but frequently called helper functions which are already performant but clog up captured trace data due to being regularly called.

We strongly recommend updating to this version to get all the performance benefits.

This update moves the application name into the dropdown trigger in the top left of the page and removes the app name from the sidebar.

A new version of Raygun4JS is now available which helps fix an issue where Mobile Safari (and other mobile browsers) were not sending events when a page is ‘unloaded’.Read more about what this entails

Removing Nginx from the configuration allows us to handle more volume at no additional cost.

Since putting this into production we’ve seen a significant decrease in 5xx errors reported by our load balancer. We’re now handling the full client load with fewer errors experienced by our users.

Fixing performance issues faster means that the Spotlight Reporting team can focus on what matters most to the business — building and delivering features for customers. They tell us “The more stable our software is, the fewer bugs we introduce. Finding and reacting to bugs earlier enables us to deliver features that actually matter.”

Raygun 101: How to use Raygun to deliver great software experiences 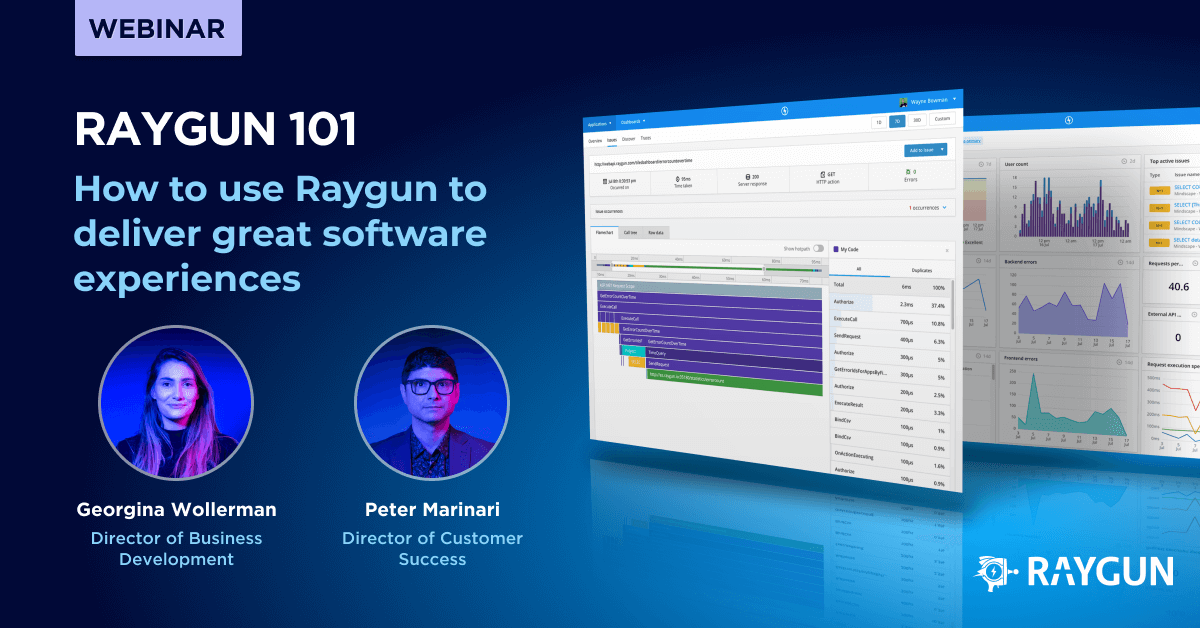 Join our Sales and Customer Success teams for a hands-on walkthrough of Crash Reporting, Real User Monitoring, and Application Performance Monitoring. In this new webinar series, we’ll cover the major features of each product as well as best practices we’ve learned from Raygun’s power-users from around the globe.

You can choose to attend webinars on August 18th, September 1st, or September 15th, or, stay tuned for the recordings.

You’re all up to date with the changes to the Raygun Platform in July.