I’ve been playing around with various Javascript charting libraries recently, and ECharts is one of my favourites. Overall I’ve found it very easy to use, and has a good balance between simplicity and flexibility. I personally think that ECharts is well documented, and has lots of good samples to work from. As it is Canvas based, and can’t be styled with css, its visual customizability is a little bit limited, though everything I’ve wanted to do has been possible. If you do find it meets 95% of your needs, you could always fork the source code.

While playing around with this, I’ve just been using the eCharts Javascript file in my project and referencing echarts directly, and hence my code below is based on this. Feel free to use require.js as the official docs do. Regardless, here’s the steps I use to start working on a new chart:

The first thing you’ll need is a DOM element to host the chart. I’ve read that this can be just about any type of element you want. I use div, because it just makes sense. Two things you’ll need on your element – first, some way to identify it in Javascript such as an id or a class name. Secondly, the element needs to have a width and height before rendering the chart, so make sure to set the size in some way such as in the Javascript, with css, or in my example below, with inline styles. (Hopefully our design team doesn’t read this blog).

This step is where most of the work will be done. You need to create an object that will define what you want the chart to look like. Below is a reasonably minimal set up just to aid in getting started. Before going into any detail, lets move on to the final step so that you’ve got a chart to display and work with.

Last of all, you need to initialize the chart object with the host element, and then apply the chart options. I’ve been using Backbone and Marionette while playing around with charting libraries, so here’s what my code looks like (Where chartHost is an ItemView ui selector ‘#chart’).

If you’re not using Backbone, there are of course other ways to get the host element, such as this simple example: 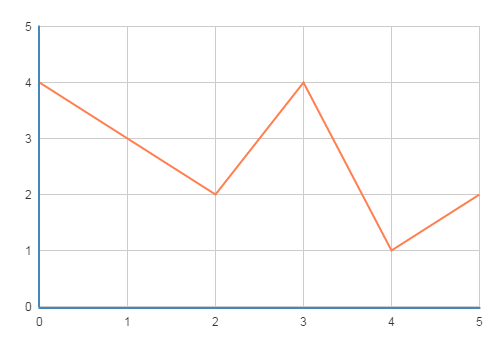 A bit about axes and series

As seen in the simple chart options example above, the fundamental components of building a chart are the axes (X and Y) and series. All of these are arrays, as you can have however many you need, and they all have a ‘type’ property which will affect their behavior, display and what further properties you can use.

The valid axis types are:

As I think the category axis is very useful and commonly used, here is in example for you to get started with. Note that I’m now setting the data property of the xAxis, and the values in the series data are single values, rather than pairs of X/Y values. Another thing to note is that you’ll want the length of the axis and series data arrays to be equal.

Want to give it a go?

This has been a very short introduction to get you started with ECharts. If you want to try it out, the next step would be to start playing around with the available chart options. Here is the documentation regarding the chart options. The colored table displays the top level chart option properties you can work with. Click the links to see what customizations you can make.