This article was last updated in October 2019 to highlight our latest swag efforts.

Developer swag (or schwag as it is also referred to) has effectively boomed in recent years. Boosted by software product companies looking to provide a myriad of branded merchandise to employees, partners, and customers, the swag for developers demand has even spawned tech startups who provide developer swag services as their product.

The roots of branded merchandise can be traced all the way back to commemorative buttons, offered during the election of George Washington in 1789,  and yet there was no organized industry for the creation and distribution of promotional items until later in the 19th century.

Jasper Meek, a printer in Coshocton, Ohio, is considered by many to be the originator of the branded merchandise industry when he convinced a local shoe store to supply book bags imprinted with the store name to local schools. Henry Beach, another Coshocton printer and a competitor of Meek, picked up on the idea, and soon the two men were selling and printing marble bags, card cases, fans, calendars, cloth caps, aprons, and even hats for horses. 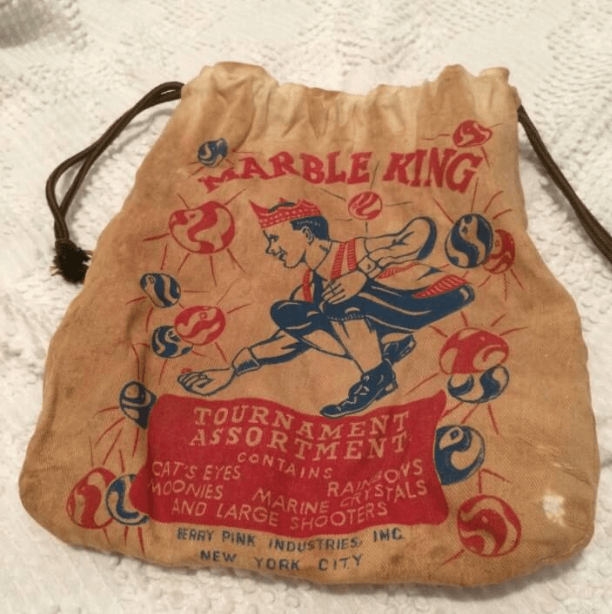 Seeing a child drop her schoolbooks in the dirt on Main Street spurred Meek to approach his friend, Mr. Cantwell, owner of Cantwell Shoes, with an idea about building store traffic, name recognition, and ultimately increasing sales. Meek’s idea was to imprint a burlap book bag with a simple but direct advertising message, “Buy Cantwell Shoes.” Cantwell would give every child who came into his shoe store a free bag. The children would carry the bag as they walked to and from school so Cantwell’s name would be seen all over town. Mr. Meek manufactured the book bag, imprinted the advertising slogan on his printing press, and both Meek and Cantwell reaped the rewards.

That simple and innovative idea became the premise for the promotional products industry we see today, and tech startups are just the same as every high street brand looking for eyeballs.

The ultimate and most popular branded developer swag item? 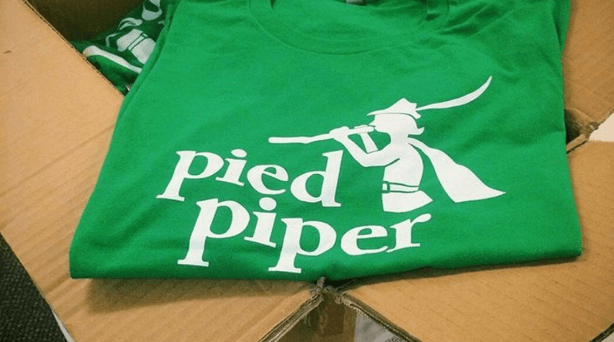 T-shirts represent the ultimate middle finger to those unnamed sources of authority who wanted software engineers to dress like “Thomas Anderson” in the Matrix.  Software engineers want to be Neo, not John Anderson. The T-shirt seemed to resonate with developers. A perfect storm of affordable, popular, and easy to produce has led to startups producing branded T-shirts en-masse, sometimes before they even write a single line of code.

Here at Raygun, we give developers the power to create perfect software experiences for their users, so our marketing is geared towards a technical audience of software developers. Finding out what they love in regards to swag has been a challenge, working out what kind of swag developers like to receive and value, and with a global customer base, how can we provide swag as efficiently as possible to our users?

When we first brainstormed the type of things we thought developers would like to receive from a company like ours, we took inspiration from other companies, like the colorful socks that were flying about in the early days of Slack. They were pretty cool, but we also heard they were pretty expensive to produce, so we set out to deliver some promotional items to engage with the developer audience without nuking our entire marketing budgets in the same breath.

We needed to come up with some branded swag items for things other than USB sticks and mouse mats! Although practical, we didn’t think that they would be loved by customers in the same way as some unique and sought after developer swag items. Also, as our swag became more popular with a global audience of developers, we needed to build systems in order to handle the increasing volume. So how do we produce and handle developer swag at Raygun?

Our most popular piece of developer swag is our self-assembly wooden Raygun kits, which we get made by a local supplier in Wellington, NZ. After approaching them with the idea, they produced a 3D computer model which went through a few iterations before we could cut our very first Raygun model kit.

The Rayguns are cut on an industrial laser cutting machine. We start off with a sheet of birch wood, 6mm thick with a protective backing layer. At that point, they are ready to go onto the laser and get cutting! 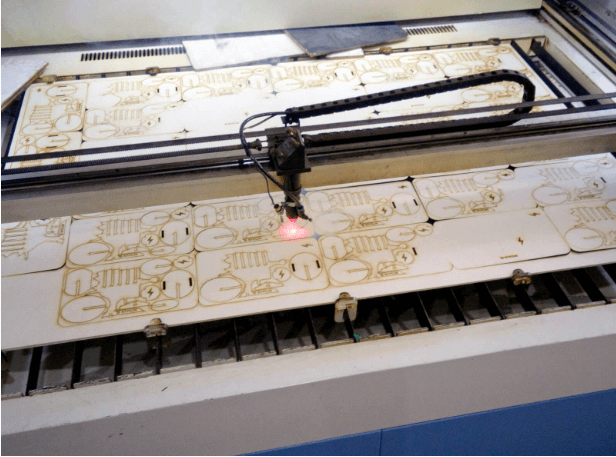 The laser can cut quite a few Rayguns out during this process and are laid out in design to minimize wastage.

When the laser cuts the pieces out of the birch wood, the protective layer on the back stops the scorch marks ruining the wood. Initially, they were cut into individual pieces and every one had to be hand peeled. Each Raygun is made up of 9 pieces, so after ordering 200 of them on the first run, this added up to 1,800 individual pieces to be peeled. We certainly are committed to our swag, and our customer’s happiness and a lot of work went into prepping them for our customers, little did they know how many hours went into those!

Recently after a few tweaks, we switched our design to use wooden boards that the pieces can be popped out from, making it a fully-fledged model design and reducing down the peeling time considerably!

Check out this video of the Rayguns being cut out on the laser.

And here’s what our Rayguns look like as a finished product: 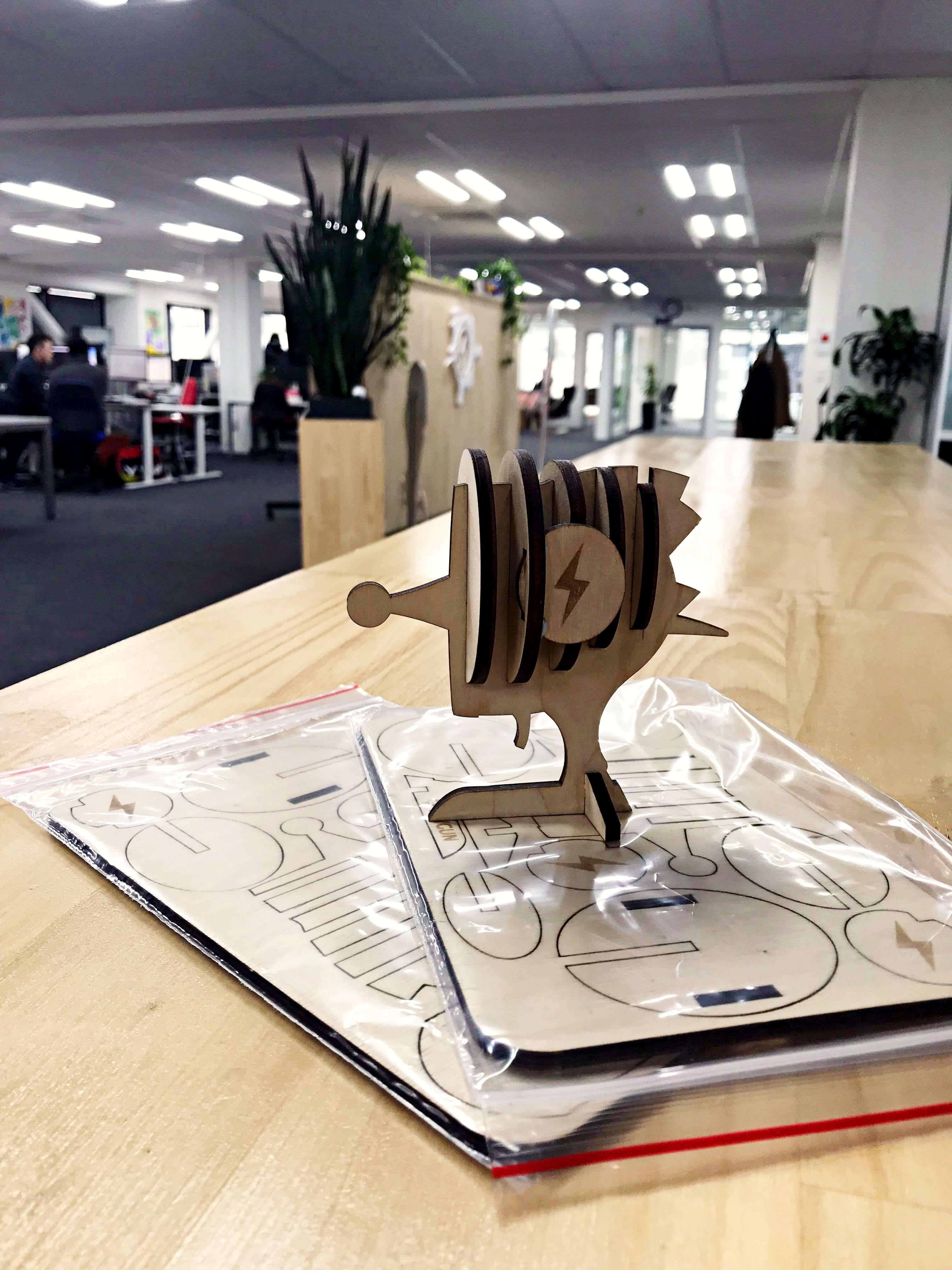 Everywhere we go, people just love our wooden Raygun models, so since you are making the effort to provide swag to your customers, something like this can really set you apart from others and stand out.

Pro-tip: Our wooden models are personal gifts to our customers and not the cheapest swag item to produce, but they are extremely effective for us to keep our brand relevant and our users happy. What swag item could you produce that fits your brand?

It doesn’t end there though - Raygun stickers!

Whether developer teams are keen to plaster their Macbooks with stickers from their favorite DevOps tools, or keep things minimalistic, adorning other office furniture rather than their computers, our stickers have always been a popular pick up at developer conferences, meetups, and events. We are quite lucky in the fact that we have a strong brand that developers seem resonate with, and everyone we meet comments how they luuuurve the Raygun gun, so creating it in sticker form didn’t seem like a bad place to start.

We recently added new characters to our sticker collection, too! 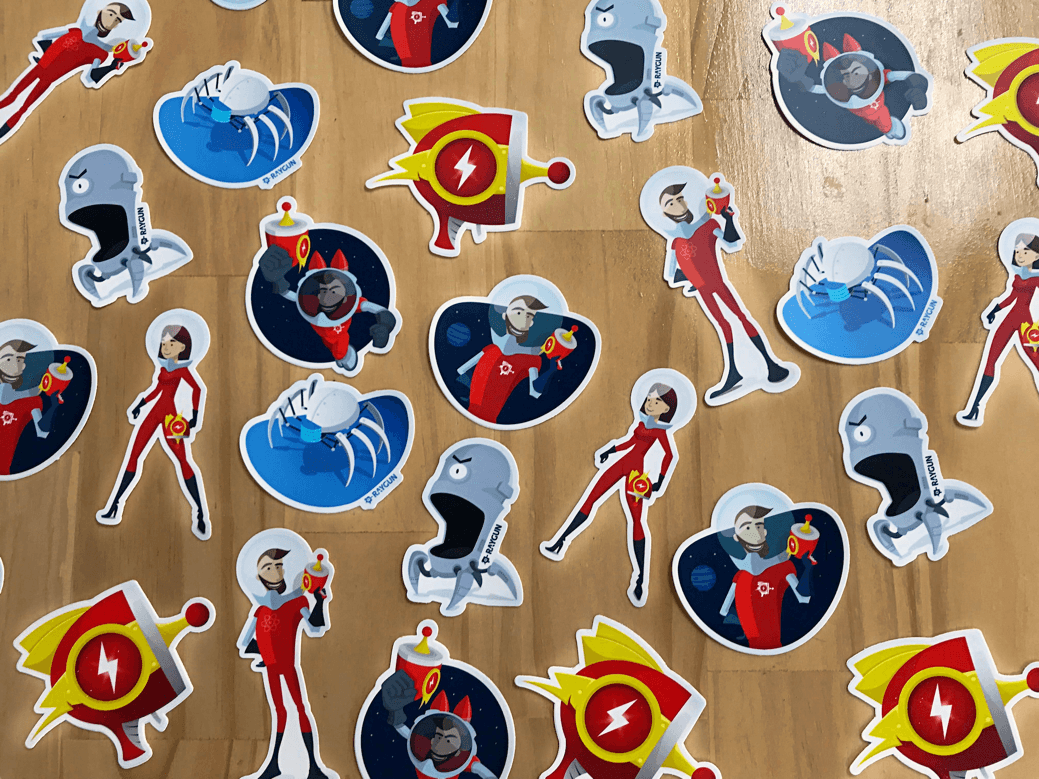 We use Stickermule for all our sticker purchases, they ship quickly, and after you have your design file locked in, turnaround is a pretty straight forward affair. We usually ship them to our Wellington office in New Zealand and distribute them in swag packs as well as use them at local events. For our US events team, they also are able to order from Stickermule and get them sent to the office in San Francisco. It works a lot better that way to cut down on the shipping costs. Plus, if on occasion we have to post them between offices, they’re fairly cheap to handle.

Pro-tip: If you’re lucky enough to score a Raygun sticker, carefully cut out the lightning bolt in the middle and it’ll glow in the dark if placed over the Apple logo

Let’s not forget the humble T-shirt

It’s true. All developers love T-shirts, we send out hundreds of them every month. You can even get one for free for trying out our product! That’s how confident we are of how useful you’re going to find it as a software development team.

We get our tees printed with Printfection as they make the send out process for global customers a piece of cake. When we set out to design our T-shirt, we ensured that it was subtle enough as a design to be worn by anyone as part of their general wardrobe rather than plastering it with nerdy DevOps slogans. This turned out to be a great decision as we now get requests from non-developers who just love our T-shirts and want one too. Maybe we’ll even set up a Raygun clothing brand one day! 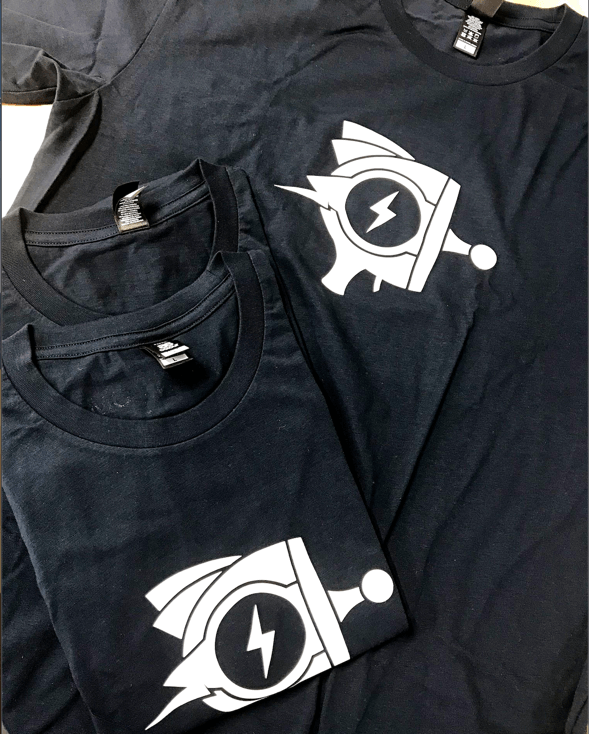 We send out t-shirts in a couple of ways:

We also use a local supplier in Wellington to print stock for the Southern Hemisphere, as it’s cheaper to post locally to Australia and New Zealand.The key here is to have a neat and ordered system where we keep an eye on our stock levels. We stock both Male and Female T-shirts in pretty much every size from Small to XXXL and can ship them to customers anywhere in the world in just a few days.

Create a T-shirt design that is not too obvious. People are more likely to wear them for things other than just painting!

Something a bit special

We’re always coming up with new ideas for swag. Since we know that most developers are caffeine-fuelled, would some branded coffee beans be a good addition? We posed this question to our team and the idea was a hit. A few weeks later, we partnered with a local coffee company, The Immigrant’s Son Espresso, to bag our own Raygun coffee beans for some very special customers. 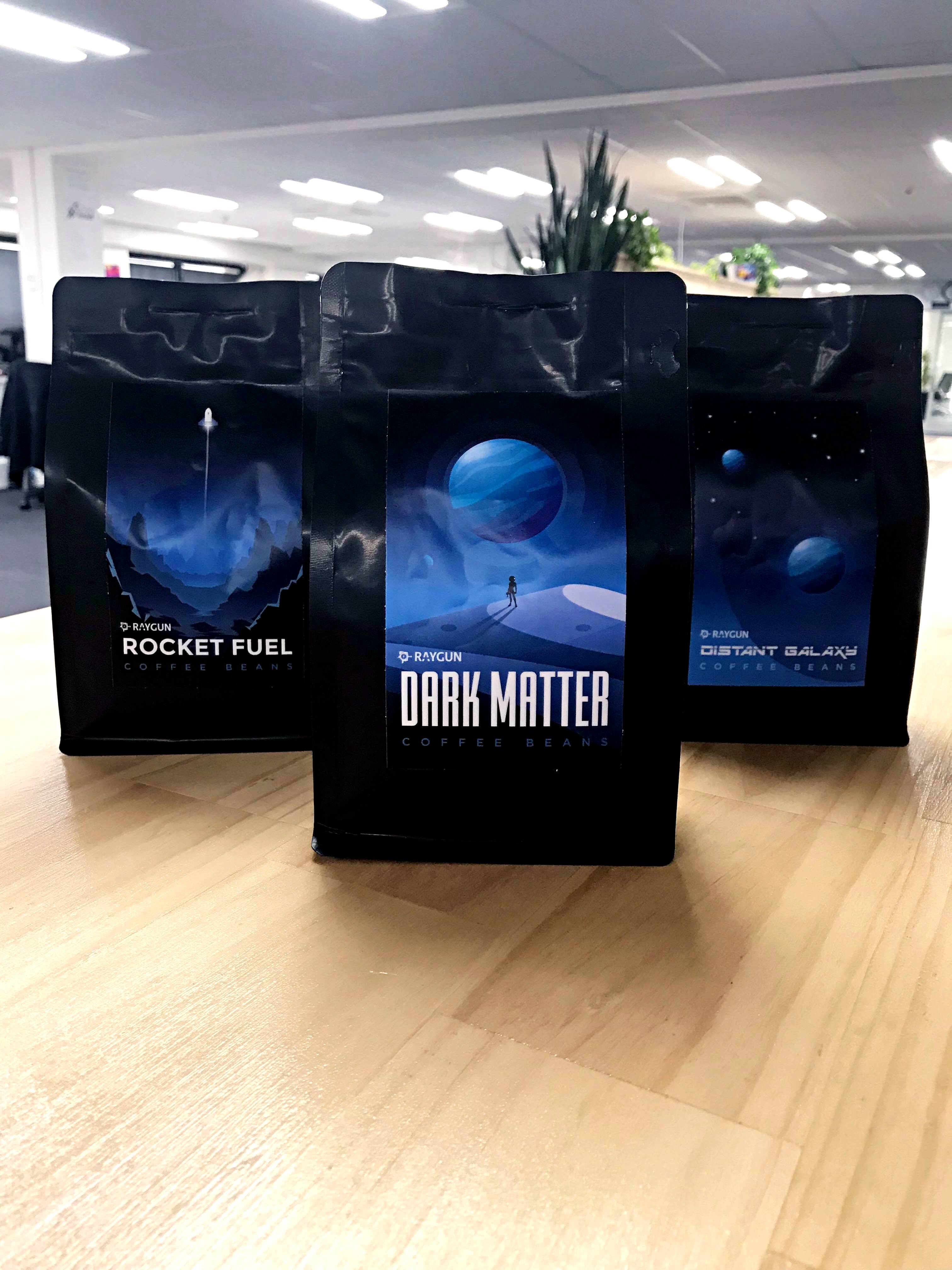 Alongside T-shirts which do go down a storm at tech events, we have an array of useful and practical takeaways for developers when they are at one of our booths. This swag is fairly cheap to produce, and as it gets laid out on the table as we’re not so bothered if people come by and grab it.

We’ve got Raygun branded pens, USB sticks, mugs and stickers all available as freebies alongside some more precious swag such as our T-shirts and wooden Raygun models that get given to current customers or people we feel have a real interest in our service.

Pro-tip: Don’t lay out all your precious developer swag for people to grab whatever they want, it’ll all be gone in a few minutes, lay out a selection and when it’s gone, you can replenish as necessary.

Having a local supplier has been a great resource for us and many of the relationships have been built over several years, but when it came time to expand our efforts to the US, we found that the printing in Wellington was far, far cheaper than the printing in San Francisco, and to post leaflets and flyers was also very costly. 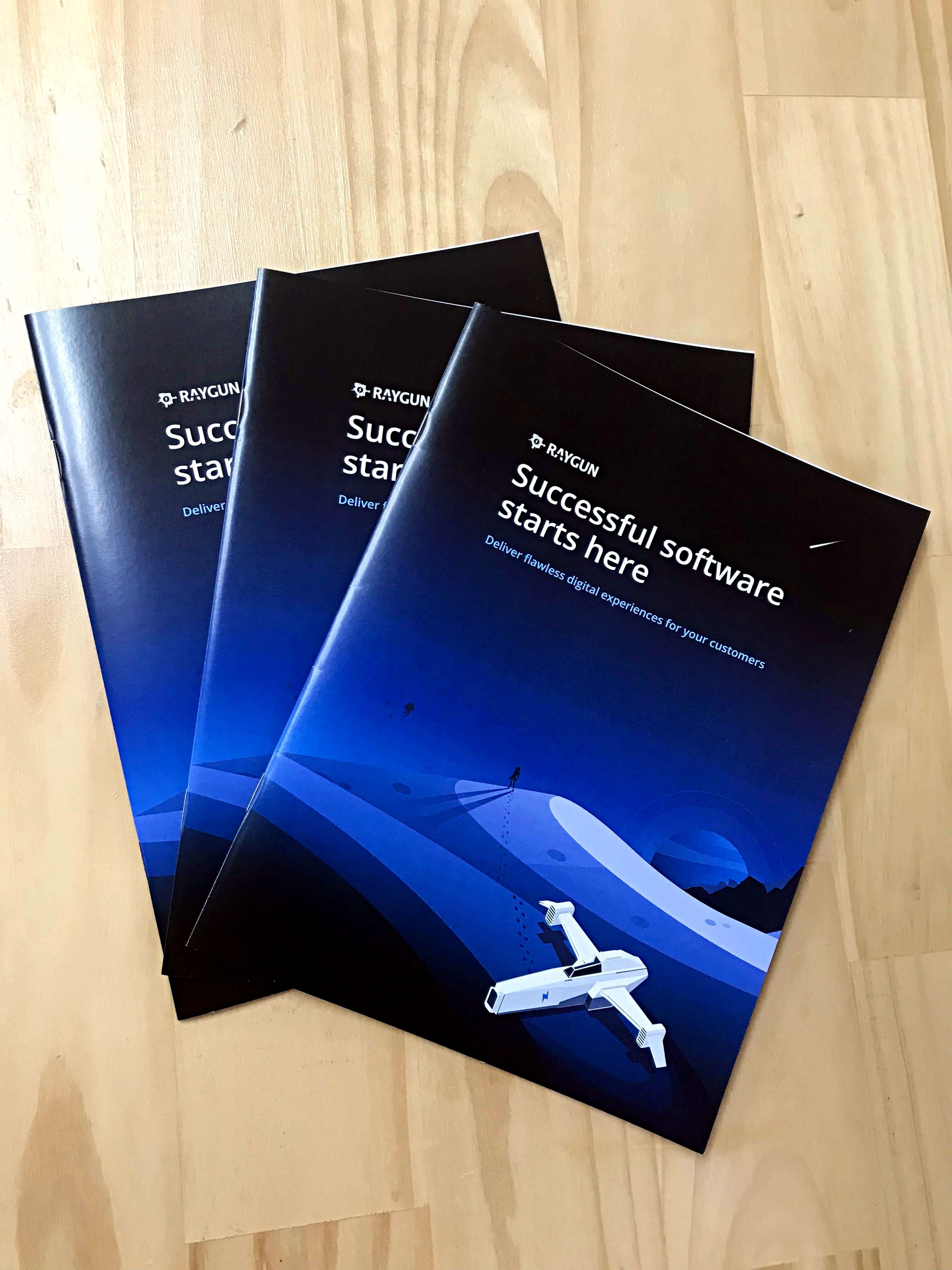 Even if we sent the file to a local supplier, the pricing seemed to be crazy in comparison, so we turned to Moo.com. This allowed us to print product information at a reasonable price, and what’s more, they were able to ship it directly to our events team in the US. Problem solved. Now when we have big print runs of our flyers, we can even send them directly to the conference venue.

Pro-tip: Postage is your enemy with heavy and bulky items. If you can get them sent directly from the supplier, you’ll cut down on your logistics costs considerably.

So that’s how we have created a fully functioning swag system here at Raygun that allows us to serve our customers, wherever they are in the world.

We maintain good stock levels of all our swag and stay organized. When you’re thinking about swag for your own company, think about how you can create something that ties back to your brand, but that customers will treasure.

It’s not about plastering your brand name over everything and more about creating something of value for your customers, not just slapping your logo onto a cheap T-shirt.

Digging through logs is a thing of the past. Get automated alerts and code-level diagnostics into errors so you can debug issues faster.