We noted with some interest the recent announcement of the io.js v2.0.0 release candidate. This community fork of node.js promises a supported version of the V8 engine, along with a greatly increased frequency of commits to master vs. the parent project.

As we’ve mentioned before, we’re keen on these developments as Node.js powers the Raygun API nodes, and ensuring these can handle the highest loads with the lowest possible response times is crucial to providing a great service to our users. A previous blog post benchmarked Node.js vs. io.js, and with the advent of the V2 release of the latter, we’d like to revisit those benchmarks to see how it stacks up in various situations.

Same as before, the following are synthetic micro-benchmarks, caveat emptor, huge grain of salt, etc. However, the charts do provide some interesting food for thought, and may provide a springboard for you to perform your own real-world tests, and potentially gain a significant speedup.

The benchmarks were conducted with identical runs through ApacheBench on a 64-bit Ubuntu VM. The configuration was 20,000 requests with a concurrency level of 100, and the test results were averaged over five runs of this.

We benchmarked two versions of node, and two versions of io.js. For node, v0.10.38 (the last release of the .10 branch) was compared against v0.12.2 (the absolute latest version of node.js).

This test involved created a simple server with the http module, and setting it to return a JSON payload on request. The results were: 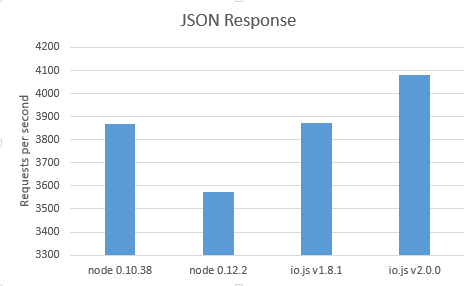 When sending a raw response, in this benchmark io.js v2.0.0 has a 14% speedup over node 0.12! They’ve even managed a 5% speedup over their own previous release. Not bad at all, but there’s more we can test.

Express was and is still a very popular choice for quickly getting the backend of a web application up and running. Last time we documented some of the performance hit you take with it, but let’s see how it does under node 0.12 vs io.js v2.0.0: 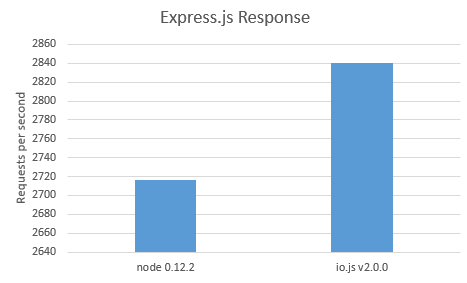 There’s a 4.5% speedup when running this test on io.js v2.0.0 – pretty good for an older framework (considering how fast the JS ecosystem is moving)!

Many newer frameworks are competing for mindshare in the JS micro web framework space, however – we benchmarked some popular ones previously. One which we missed was Koa.js, which was in fact made by the authors of Express.js.

One of the huge benefits with Koa is that you can build code using ES6 features – including generators and the yield syntax which enable asynchronous code (no more callback hell). This benchmark was written using generators and run with the node --harmony flag enabled. The logic involved a simple bit of routing, and set the response to be an HTML fragment.

Let’s see how Koa does running on Node vs. io.js: 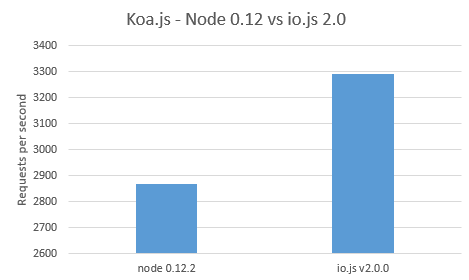 A 14.8% speedup from Node to the latest version of io.js – certainly worthy of note. If you’re looking at one of the latest generation of JS backend frameworks, it certainly pays to give io.js a look as out-of-the-box you get some rather impressive perf improvements. When running a cluster of VMs using the Node stack, depending on scale, that speedup may result in several fewer boxes needed and correspondingly less infrastructure costs – all for free.

We do error tracking

We love perf improvements here at Raygun, so if you have any experience running io.js or Node in production feel free to post in the comments. We also have a kickass Node error tracking implementation – there’s a free 14 day trial of Raygun available here. Keep improving that perf, and blasting those errors!