When you’re spoilt for choice, it’s all about the mission

According to the Digital Nation Report, written by the Digital Skills Forum, IT accounted for $16.2 billion of New Zealand GDP in 2015, and makes up 9% of the economy, employing almost 100,000 people. The report also highlighted a significant skill shortage, noting that in 2017, 14,000 new jobs were created in the tech sector, yet only 5,090 students graduated from computer science or information technology studies the year prior.

So what are tech companies doing to attract the right candidates? - A lot apparently.

According to Comparably’s 2018 Best Companies for Corporate Culture report, eight out of the top ten best places to work in America are technology companies.  It seems that New Zealand technology companies are being quick to follow suit, offering flexible working arrangements, increased learning and development opportunities and even adding perks like free lunches and even happiness engineers!

We wanted to take a closer look inside Raygun to understand what working in a tech company in Wellington really looks like in 2019, speaking with Director of Marketing - Nick Harley,  Chief Operating Officer - Lana Vaughan, Raygun Intern - Griffin Lilley and co-founder and CEO JD Trask.

So, firstly, how does one get a foot in the door at Raygun?

“There are many ways to get a job at Raygun, we are always on the hunt for skilled people from technical marketers to designers, software developers and business development managers. We have a careers page and are always accepting CV’s, so actively encourage people to send theirs in, even if there isn’t a suitable  job listed on the website", says Director of Marketing - Nick Harley.

We also have a big focus on paid internships to help get those new to the tech sector in the door. We usually hire about four interns over the summer to work on projects. Many of the interns we have hired from these programmes are still with the company today, with one employee just celebrating his 10 year anniversary with us!  They have rocketed their careers and experience which helps us grow bigger, faster and stronger as a company.”

“All our internships are paid, and we offer a safe, welcoming and encouraging place to learn. We are aware when we take on interns that they are here to gain experience and for us to nurture and teach them valuable skills. We are also able to offer a range of experience over a broad set of disciplines unlike larger companies that will tend to fit an intern into a niche or specific role or task.”

A positive, can do attitude is essential for any intern wanting to get their start. After all, you can train people well but you can't change someone's personality or level of interest. We look for inquisitive people who appreciate the opportunity and have a thirst for learning.

We usually find interns through initiatives like Summer of Tech and have hired interns from that programme every year since it first began a decade ago. The Internship programme at Raygun consists of us giving hands on, practical work experience for the interns where they learn the skills necessary to excel in their careers. They are offered a minimum number of hours (400) and paid a competitive hourly rate.

The intern receives full time employment, mentoring and tutoring on a variety of different aspects of their role, to gain broad experience and really hone in on the areas they enjoy the most. Interns leave Raygun with the skills and experience they need to secure a full time job after their studies have finished, or we end up hiring them ourselves.

A growing trend of internships and competitiveness to attract the right talent has seen Silicon Valley offering internships that pay more than nearly double the average annual base salary for the U.S. worker.

According to Summer of Tech’s latest report, Wellington is leading the way in terms of internships and spokesperson, CEO Trent ManKelow says the number of internships is steadily growing.

“We started Summer of Tech in 2006 and since then have expanded to include internships for all areas of technology and the Summer of Biz, for marketing and HR roles.

Internships are a great opportunity for young people to expand their skills and for companies to benefit from the fresh and diverse thinking of students. 83% of interns are employed (part time of full time) as graduates afterwards, by the company they worked for during their internship,” says Trent ManKelow.

Summer of Biz Intern Griffin Lilley says taking on an internship at Raygun expanded his knowledge in areas he didn’t expect, like marketing.

“The internship entailed a massive range of things that I didn’t initially expect, and enabled me to massively increase my skills as a marketer. One of my main responsibilities at Raygun was looking after their Linkedin ads and optimising them to increase conversions and CTR, which having never run Linkedin ads was quite a learning experience, says Griffin Lilley.

Griffin says the 400 hours internship that took place over the summer period was challenging, but rewarding.

“I learnt so much the first couple of weeks, at the end of the day my brain would be fried from the day, but I couldn’t wait to go in the next morning. Recommending it would be an understatement, I’ve pretty much forced most of my friends to sign up for the Summer of Biz programme as there is honestly no downside and the upside is just ridiculous. Raygun easily went above and beyond what I expected from the internship so I would especially recommend going for them if you have the chance.

Attracting the right type of applicants is a trend that technology companies are focussed on, and company culture plays a huge part says Chief Operating Officer, Lana Vaughan.

“Though we prefer people to work in the office we know that people have lives and have the ability to work from anywhere if they need to. Many of the team have young children and we support them by offering the flexibility often needed around young families. We expect people to repay this trust by bringing their best selves to work each day.  Everyone on the team works hard, is ambitious about our growth trajectory and wants to be part of something special,” says Lana Vaughan. 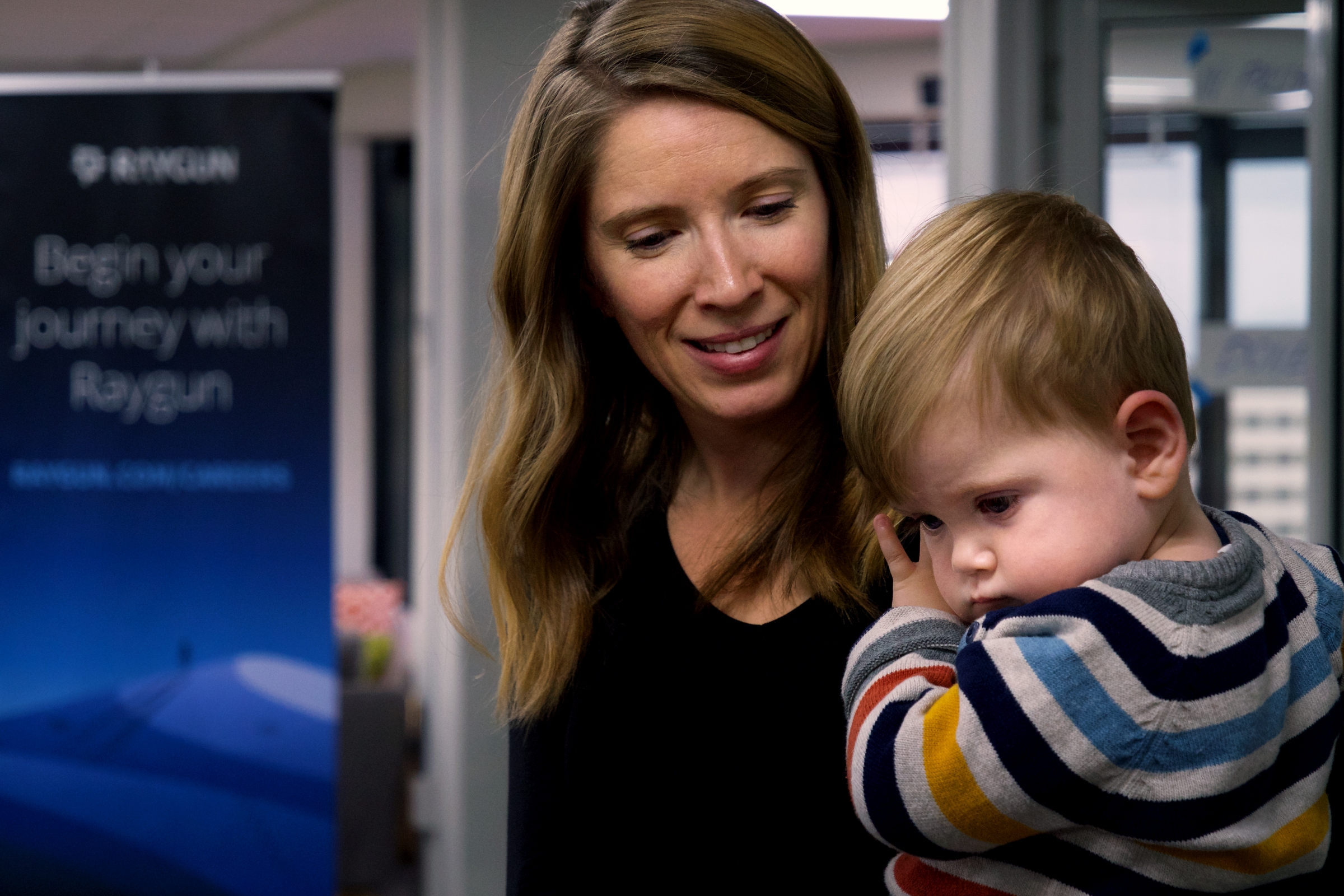 Lana Vaughan with her son

When childcare fell through for Lana’s son there was a period of about a week where she couldn’t get cover, and thought if this happens to her, it means it is likely to happen to others within the organisation. Nowadays it’s not uncommon for workers to bring in their kids and have them on their knees while they work during school holidays.

“We went out and bought a playpen and toys for the office, and work continued as normal knowing the kids were safe, quiet and entertained,” says Lana Vaughan, Chief Operating Officer at Raygun.

Hop aboard the rocketship - join the mission

Founders John-Daniel Trask (JD) and Jeremy Boyd say attracting the right talent remains a challenge, and are always looking for fun and new ways to stand out from the crowd, to get the right people into the business.

“We are big on getting high performing people that really want to accelerate their careers and be a part of something that will take us to the next level, which is why we have focussed our careers theme on a space mission.

It’s a fun way of visually portraying what we are about. We strive to put in place a work culture that attracts hard workers and then rewards those workers for that hard work. I don’t think it’s about the tech sector being spoilt, it’s about fostering a good workplace culture, attracting the right talent and looking after them so they stay, every sector should be doing it,” says John-Daniel Trask, CEO Raygun.

Raygun is an award-winning application monitoring company. Founded in 2007, Raygun is headquartered in Wellington, NZ with additional offices Seattle. Servicing clients such as Coca-Cola, Domino's Pizza, Microsoft and Samsung, Raygun generates 90% of its product revenue from exports and in 2014 successfully raised capital to aggressively grow its global customer base. Raygun has previously been recognised as a finalist for Wellington Gold Awards 2016, won NZ Hi-Tech Awards Start-up of the Year 2015, and won the Innovative Hi-Tech Software Product of the Year 2014 at the NZ Hi-Tech Awards.

Think you are about taking your career to the next level? Interested in a role at Raygun? Apply here today 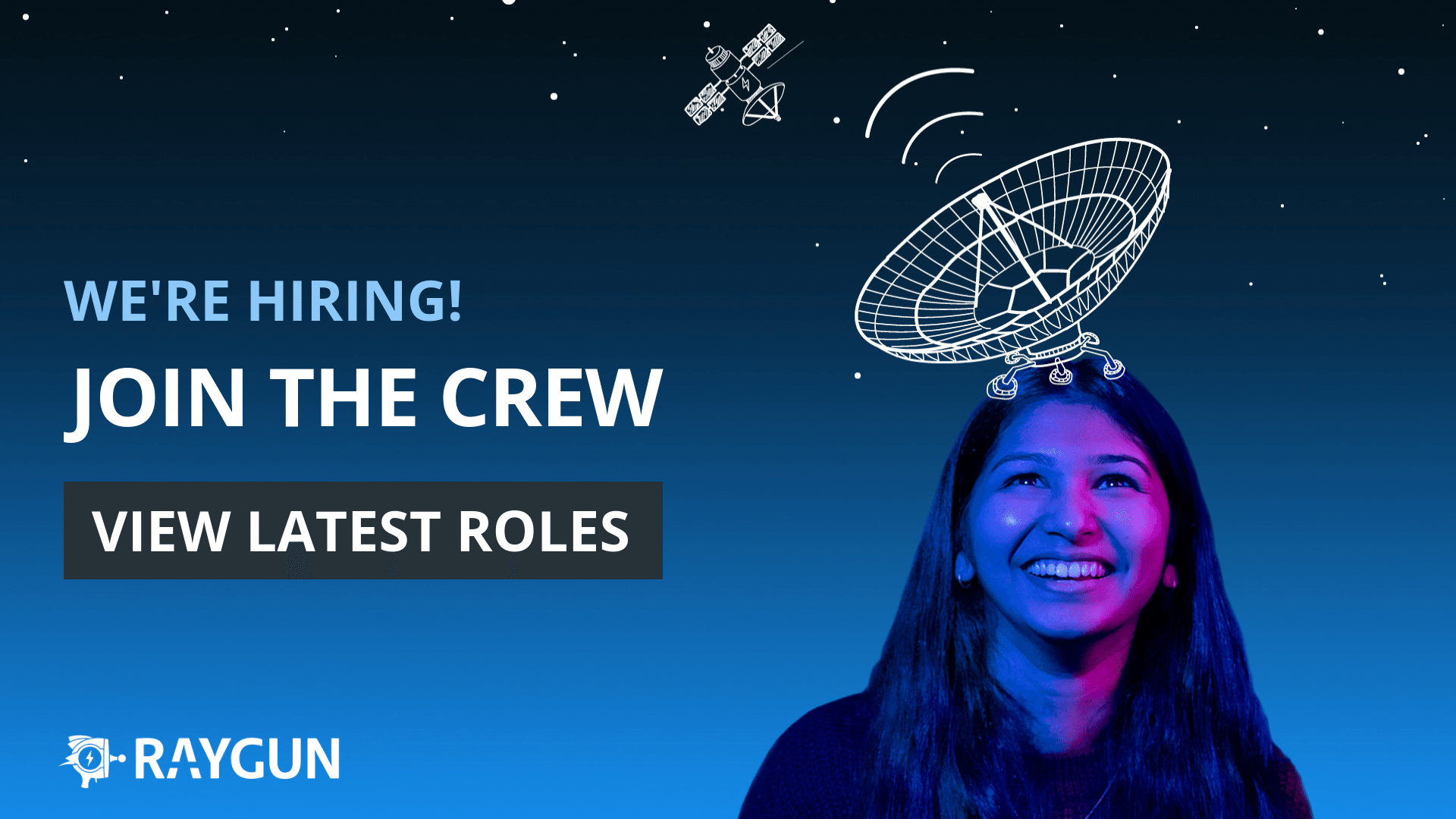